In a grey and misty past I played 2 or 3 sessions of D&D and I did not like that. I don't even know what version that was, but the DM was hackling the players how stupid they were for not solving his puzzles. I decided that D&D was not my kind of game, even though I loved Larping and I knew larping came forth from D&D. Years later, in januari 2015, I started DM-ing my first campaign: The Lost Mine of Phandelver from the D&D starter set.

I met my now-significant-other long after me depressing ttrpg experience, and some time before I started GMing. He really wanted to play D&D with some friends and managed to get me excited about it too. Since I was a plotwriter/gameleader at larp I was apparently the perfect person to be the DM. By that time I had also made new friends, heard better stories about tabeltop roleplaying games in general and was willing to give it a try. So we did, and I loved it! In hindsight, that first session was.... creative? Halfway the first dungeon I suddenly got an eerly feeling I was missing something; I forgot that monsters were supposed to be in there and the players would have to fight them. After mij 3 nanosecond panic attack a miracle happened: the monsters just came home. What a coincidence! 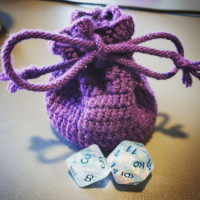 That was the start of my forever-GM life.

Over the following few years I ran several D&D 5th edition campaign groups. I played from published campaignbooks en downloaded oneshot adventures. I followed the story, or deviated a bit, or deviated to the point I could chuck the story in the bin. I railroaded and sandboxed. But most of all: I had fun.

I also had the honor and priviledge to become the house-DM/GM for Jack of Dice (they sell dice!) at events, where I give short 1 hour oneshot demo's.During those demo's I have no control over who joins the table, and how the group of players match up to eachother. I have had people who never heard of Dungeons and Dragons but were willing to give it a try up to groups of players who have been playing together for years but wanted to have some fun. When I started it I wanted to help promote the hobby, I never could have known how much fun it would be. I also learned a lot about DM-ing, players, awesome silly player decisions and improvising on the spot. We do not have any events at the moment, but I know they will start as soon as it is possible. I am looking forward to that day, and being able to do the demo's again.

In the mean time I still have my 3 campaign groups. Two of those groups I run with D&D 5th edition rules, from the published books although I am deviating from that and turning them into my own campaigns. The third group I started recently with, and we play with the Fantasy AGE ruleset in my own homebrew setting. This is quit challenging because F-AGE does not have tons of lore like D&D, and I choose to make my setting in the 'weird fantasy' idealogy so I'll probably have to come up with a lot of monsters myself. I am looking forward to all of it.